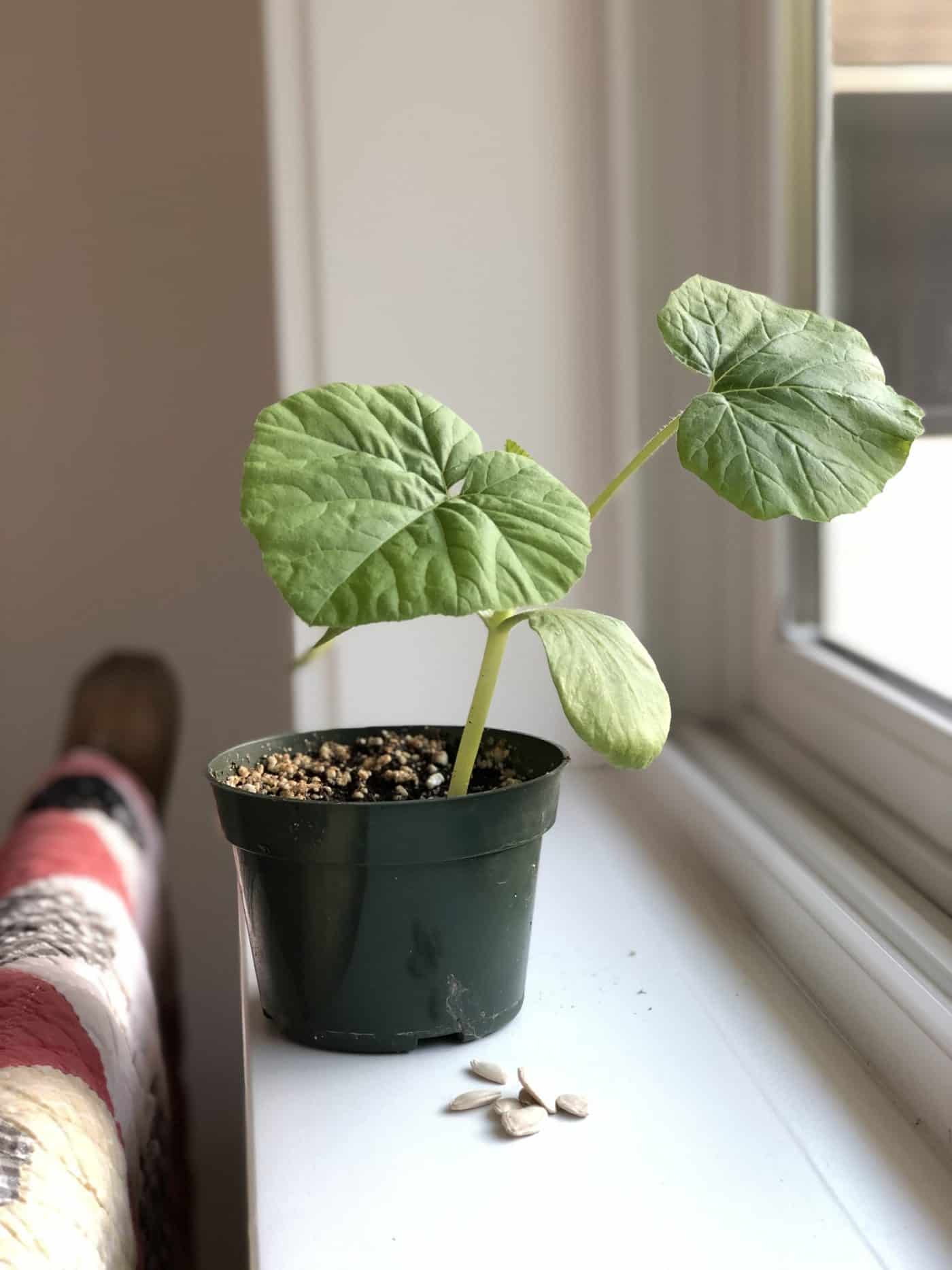 Halloween is not complete without pumpkins! During the Halloween season, you can buy pumpkins or you can harvest your own. Growing your own pumpkin gives you a feeling of accomplishment. Here’s everything you need to know about when to plant pumpkins for Halloween.

Plant pumpkins for Halloween during the month of June in most climates. Pumpkin seeds can generally be planted from late May through to early July for an October harvest.

There are lots of things to consider when scheduling your pumpkin seed planting for harvest before Halloween. Read on to learn all about when to plant pumpkins for the Halloween season!

When To Plant Pumpkins For Halloween?

It’s key to have your pumpkin crop ready in October! In general, pumpkins take 3-4 months to grow from a seed into a plant with several mature pumpkins on it. Larger varieties take longer to grow than smaller varieties.

Check the seed package for expected maturation period length (120 days vs 80 days). Note that it is still possible to plant pumpkins in July (especially in the south) – they just might be smaller. If it’s already the first week of July, consider buying seedling plants instead of growing the plants directly from seed. The pumpkins might not be the biggest, but hey, that’s ok! I’ve grown mini white pumpkins starting in mid-July for use in this mini white pumpkin Thanksgiving table centerpiece.

Learning when to plant pumpkin so they’ll be ready for Halloween is just scratching the surface. In fact, there are plenty of things that can go wrong if you don’t know how to manage the entire process. To help you with that, below is a guide for best practices when planting pumpkins for Halloween.

It’s highly unlikely that you will need all the seeds, so it’s best to make some seed selection. What you want to pick-out are the big-sized seeds as they are the ones that have a higher chance of growing bigger and flowering.

Keep in mind that pumpkins also have plenty of varieties. The popular ones are Autumn Gold, Dill’s Atlantic Giant, and Casper. Autumn Gold is excellent for carving Jack-o-Lanterns. Dill’s Atlantic Giant is primarily chosen if you want to grow giant pumpkins. Lastly, if you wish all-white pumpkins, then Casper is the go-to option. Casperita is a mini white pumpkin variety.

Caring For Your Planted Seeds During Growing Period

The things that you should be on the look-out for when caring for your pumpkins are weeds, insects, and pests. Also, you’d want to be more vigilant during the early parts of the growing phase, as these are the times that the pumpkins are more susceptible. A good organic fertilizer can also be helpful.

You have to be diligent in watering your pumpkin plants since diseases may easily afflict the vines. The best time to water is generally in the morning. This is especially true during summer months when afternoon temperatures get quite high. Adding organic mulch around the perimeter of the pumpkin is also highly advisable as it helps in keeping the pumpkins stay hydrated.

When you notice pumpkins are starting to form, you can encourage the plant to direct its remaining lifespan into producing pumpkins rather than growing lots of vines. Do this by pinching off the ends of the vines. Vine pruning is an important step not only for space management but also allows the plant to focus on the pumpkin.

Here is a detailed article all about how to grow pumpkins.

A single pumpkin season will typically range between seventy-five to one hundred days. A few weeks prior to harvesting, remove any leaves that are shading the pumpkins on the plant. By doing so, your pumpkins will have more colour.

You’ll generally know when the pumpkin is ripe for harvesting when the colour has developed and the skin is hard when you touch it. The stem is another good indicator if the pumpkin is ready for harvest. Observe the pumpkin stem on a regular basis, watching for it to become shrivelled and dry.

When it’s finally time to harvest the pumpkins, it’s advisable that you wear gloves. However, the most important part here is to leave a bit of a stem on the pumpkin. Leave at least one inch of stem, and consider leaving a few inches on medium and larger-sized pumpkins. If you cut the stems too short, there’s a good chance that storability will shorten.

Finally, place the pumpkin under the sun for about ten to fourteen days so it will harden and adequately ripen. This is a great time to display your pumpkin on the front porch! For instance, it could be kept whole on the front porch for a few weeks during the month of October and then carved in time for Halloween. Pumpkins that aren’t ready to be picked until the end of October can be picked and carved fresh, or displayed whole and then used for Thanksgiving pumpkin pies.

Generally, pumpkins will take around three to four months to grow. So the best time to plant them so it will be ready for October is around June for most areas. If you are a bit late, then it’s still possible to start planting them during July if your area is in the south. Otherwise, you may have to buy a seedling plant. Lastly, larger pumpkin varieties will take more time to mature, so plan accordingly. 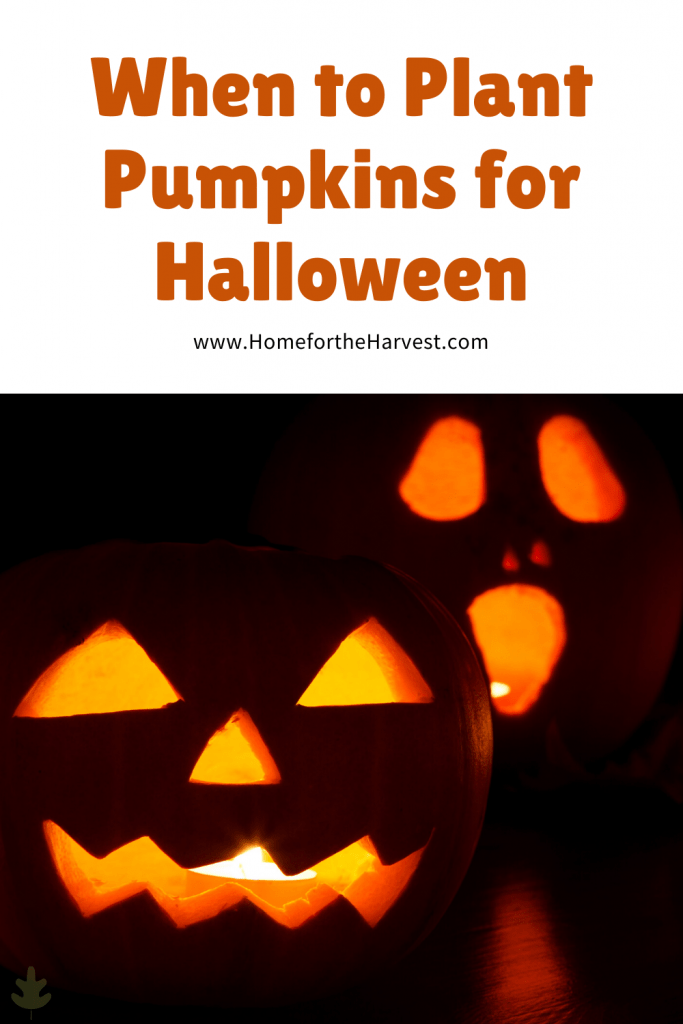