Both potting soil and garden soil have their place in the garden. When choosing between potting soil vs garden soil, the main factor to consider is where the soil will be used.

Garden soil and potting soil are made of completely different materials. Potting soil is a blend of peat moss, perlite, composted plant matter, and other ingredients. Garden soil is comprised of a whole host of tiny rocks, decayed plant and animal matter, and living organisms.

Garden soil can be dug up from a backyard. If you’ve got a yard, you’ve got access to garden soil. Garden soil is generally something you find outdoors or buy in bulk locally.

Potting soil has to be purchased from a garden centre, nursery or big box store. Potting soil is always a manufactured commercial product that may include ingredients from all over the continent.

Garden soil is made of weathered minerals (tiny rocks), decayed plant and animal matter, and a whole host of living organisms that have naturally come to rest together in a patch of ground. Garden soil can be highly variable from location to location.

Potting soil is formulated from peat moss, perlite, composted sawdust, and other manufactured ingredients which have been trucked to a single location, processed into a consistent product, and packaged into bags of potting mix.

There is very little overlap in the actual materials that make up garden soil vs. potting mix. Read the label to know what you are getting.

The holes between the soil particles are just as important as the soil itself. Empty space between the tiny particles is filled with air and water, which are both key to the health of a plant’s roots.

Garden soil naturally does have some void space between particles. Soil that’s been overly compacted will not grow plants easily because the roots don’t have adequate air and water. Plants grow better in nice loose garden soil that’s been left relatively undisturbed.

Garden soil is heavy and dense. Hopefully it’s rich in organic matter that holds lots of water, so it will stay moist for a long time. Garden soil, however, is prone to compaction. Potting soil does hold water, but it also lets water drain easily.

Potting soil is light and fluffy. Containers of potting soil will dry out faster than in-ground garden beds, but are less likely to become compacted over time. A bag of good potting mix is going to be a lot lighter than a same-sized bag of garden soil. There is a lot of air in a bag of potting soil! Potting mix that’s drenched with water will, however, start to get heavy.

Just be sure to investigate the actual composition of the soil, either by reading the package or researching what the soil you’re buying is actually made of.

Garden soil is full of living organisms. Outdoor soil in the ground is home to bacteria, fungi, earthworms, bugs, and other living critters. The soil-food web is a key part of outdoor soil health. Life in the soil should be happily encouraged outdoors.

A new bag of high-quality potting soil is “sterile”, and is void of living organisms. Most people aren’t keen on bringing creepy crawlies into their homes in garden soil, so the lifelessness of potting soil is a big benefit for indoor gardening.

Garden generally contains lots of seeds, some of which are viable and can germinate. This means weeds. Potting soil is meant to be sterile and completely free of weed seeds. Using potting soil means fewer weeds.

Potting soil is so light that it’s best watered gently with a watering can. Garden soil is less likely to fly all over the place than potting soil is, so it can also be watered with a hose or overhead sprinkler. Both can be watered effectively with DIY drip lines.

Potting soil is more expensive than garden soil. This is because potting soil has to be processed from mixture of different ingredients. Garden soil can just be dug up and sold with a bit of mixing. A bag of potting soil may be $5 to $25, depending on the brand, quality, et cetera.

Always ask questions to get to the root of where your soil is actually coming from. Was it mined sustainably by some you know just down the road? Or is it mostly made of composted cow poop from a giant feedlot a thousand miles away? It’s worth asking the question.

Garden soil has a very wide range of characteristics like pH, salt content, and even metals. High-quality potting soil is much more tightly controlled. Potting mix is formulated to have specific characteristics for specific applications. While not every batch can be exactly the same, there should be a pretty narrow variability in decent potting soil.

When to Use Potting Soil

Plants in containers have different needs than the same plant would have in a natural setting. Potting soil should be used in all indoor gardening applications and even potted plants outdoors. Potting soil doesn’t contain any heavy soil minerals (tiny little rocks) or living organisms that could be a bother indoors.

Container plants that use potting soil will be lighter to move around than if garden soil were used. Potting soil is also great at holding air and water for plants that have restricted access to soil because they’re in a pot (instead of the ground). If the plant is only getting access to a limited amount of soil, it might as well be the right soil for the job.

Use potting soil in planters, hanging baskets, window boxes and other containers. Potting soil helps containers drain and not get too heavy. Because they drain well, potted plants allow air into the soil easily. The importance of air to plant roots can’t be understated – they need to breathe! Remember that plant roots need both air and water. Don’t waterlog a plant or let it get too thirsty.

Potting soil is particularly good for baby plant seedlings, houseplants, and exotic plants. There are tons of mixes out there, many of which have been formulated for specific purposes. You can buy cactus potting soil, orchid potting soil, succulent potting soil, seed-starting potting soil, and even potting soil for growing organic vegetables. Not all plants will grow in all types of natural soil, so you sometimes do need to purchase a specific type of soil (particularly for non-native plants).

Potting soil should also be used when plants are most vulnerable to disease. Sterile potting mix is the right choice for growing seeds into seedlings, as the baby plants really do not need any problems from bacteria or other nasties. The germination process is hard enough! It’s like washing your hands before handling a baby.

Potting soil is great for apartments and any application where you don’t need much soil. It’s easy to buy in small quantities. Even if it’s more expensive than garden soil, it may be more readily available in small quantities. Choose a high-quality potting soil that contains perlite rather than a nicely-packaged bag of composted sawdust.

When to Use Garden Soil

Raised beds are a perfect example of when using garden soil makes sense. Garden soil can be bought in bulk at a much cheaper unit price than potting mix. Garden soil can be mixed with other ingredients to promote healthy plant growth. Some of the best raised bed gardens (like Natural Cedar Raised Garden Beds (Easy Assembly, Made in USA)) are nice and high off the ground – meaning they’re easier to use (but require quite a lot of soil!).

For our raised beds, we used a trailer full of purchased OMRI-certified garden soil mixed with lots of homemade compost and a few giant bags of perlite. Perlite can be purchased separately and mixed into soil to make it less dense and hold more air. It can be a bit of a bother blending your own soil mix for raised beds, but it is worth it.

Garden soil is perfect for levelling lawns or filling in low spots on paths. Grass can grow well in it, and you won’t have little white perlite bits floating to the top of your lawn soil.

When using garden soil, a laboratory soil test can tell you quite a lot about what you’re working with. A soil test will inform you of the pH of your soil as well as any nutrient deficiencies. This information lets you choose the correct fertilizers with confidence.

Can I Use Garden Soil in a Container Garden

The dense, heavy nature of garden soil makes it less-than-perfect for potted plants. Garden soil doesn’t drain as freely as potting soil. Potted plants in garden soil may not get enough air to their roots. There aren’t happy little earthworms helping out the soil ecosystem inside an enclosed container plant. The pots will be super heavy to move and the soil will be prone to compaction over time.

What about if you’ve got some giant outdoor planters that would take WAY too much potting soil to fill. This is tricky but there are some options.

Filling the entire pot with potting soil might just be prohibitively expensive. You can make your own non-sterile soil mix by blending garden soil with perlite and compost. You can place some empty containers in with the dirt just to take up some volume (be careful of tippy planters). Or you can just fill the thing with garden soil and hope you never have to move it. And if you have to move it….it’ll have to be emptied by the shovel-full or transported with heavy machinery.

Will a container plant grow if the pot is full of garden soil? Probably. Would it be happier if the pot was full of potting mix? Probably.

Can I Put Potting Soil in a Garden Bed

The only time I don’t re-use old potting soil in the garden is if there was a problem with disease. I’d be hesitant just to throw old potting soil in the garbage. It can go through a hot composting process before being re-used…it isn’t garbage. Your municipality may have a hot composting program for yard waste. Sketchy potting soil can also just be used as volume in a back corner to fill up a low bit of ground or just sit for a while and think about what it’s done. 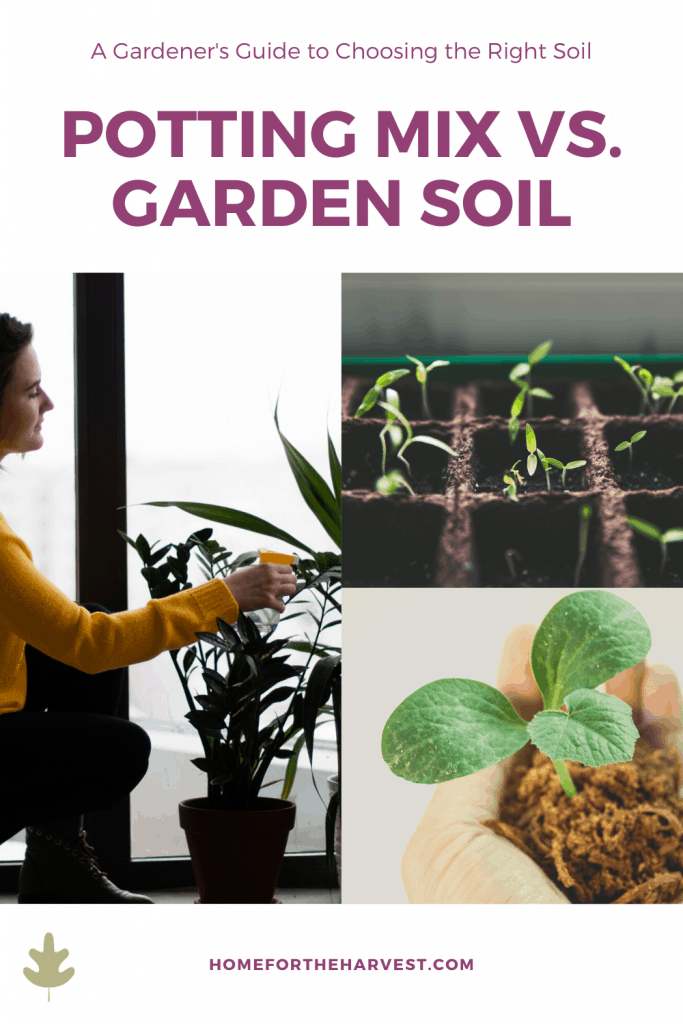