Wondering how to save pumpkin seeds to plant next spring? Fortunately, these seeds are simple to save.

To save pumpkin seeds, start by pollinating blossoms by hand, so the plants grow true-to-type pumpkin seeds. For genetic diversity, you’ll want to collect ripe hand-pollinated pumpkins from 6-12 (or more) plants of the same variety. Slice into the pumpkins and remove the seeds and stringy pulp with a clean spoon. Wash the seeds in a jar of water and discard any seeds that float. Then place the seeds out on a plate or coffee filter to dry for a day or two before storage.

Read on to learn all about how to save pumpkin seeds!

Pumpkin seeds are among the easiest seeds for beginners to save for future planting. They’re also a great way to get started with seed saving because you can save seeds from pumpkins you’ve grown yourself or from pumpkins purchased at the farmer’s market. You don’t always know what you’re going to get, but the process is very fun!

Different varieties of pumpkin within a single species can cross-pollinate, meaning you have to be quite careful to avoid cross-pollination if you want to preserve seeds of a specific variety from year to year. Pumpkins from different botanical species are unlikely to cross-pollinate.

Start by planting at least 6 to 12 pumpkin plants of your desired variety. This will help ensure you have a good amount of viable seed that is genetically diverse.

Pumpkins are not self-fertile. Each plant has both female and male flowers, but the female flowers need to be pollinated with pollen from the male flower of a separate plant for good quality fruit and seeds. Two plants of the same variety can pollinate each other, but a single plant pollinating itself won’t lead to good seeds. To avoid accidentally pollinating a plant with its own pollen, you may wish to space the pumpkin plants far enough apart to tell which vine is which.

Make careful the pumpkin you pick is open-pollinated. Open-pollinated varieties, such as heirloom and non-heirloom (recent) types, if they aren’t hybrids (F1 crosses), are permissible.

Many of these heirloom pumpkins are also great culinary pumpkins for baking into tasty treats like pumpkin pie.

Other pumpkin cultivars/varieties of the same botanical species should be kept separate from seed-saving plants. For Cucurbita pepo cultivars, note that the species also includes zucchini, and so the pumpkin blossoms will have to be separated from zucchinis as well. The variety you’re preserving can simply be separated from others by planting it far away from other varieties or erecting a physical barrier between them.

Pumpkin plants have large isolation distances for seed saving. To minimize cross-pollination, isolate varieties by 800 feet (250 meters) or more. Because this is such a large distance, it makes more sense to isolate single pumpkin flowers rather than the entire patch.

Most pumpkin seed savers either bag individual flower buds before they open or hold them closed (to prevent insects from entering). You can either tape them closed or hold them closed with a clothespin or hair clip. If you have an entire hoop house with insect netting to dedicate to a single variety, that can also work quite well.

Consider adding a variety of blooms to the garden. These flowers are meant to keep pollinating insects occupied and distracted. Instead of traveling from one pumpkin plant to the next, we want bumblebees to spend their time around these other (distraction) flowers. Between varieties, planting a tall hedge-like crop like corn will also assist in decreasing cross-pollination.

Keep your new pumpkins healthy by watering them often, removing any sick leaves, and examining them for pests. You’ll also need to use a slow-release organic fertilizer and mulch the soil around the roots to keep it wet and keep the roots cool.

Watch for flower buds, as you’ll need to catch them before they open. They are usually starting to look a bit yellow but still straight and pointed rather than ruffled at the end. Put a mesh or silk bag over the individual flower buds before they open. Alternatively, hold the petals closed with tape or a clothespin/hair clip. This will keep out insects and allow for careful hand pollination with a paintbrush.

Hand-pollination of the pumpkin blossoms can start the next morning (as blossoms close in the afternoon and pollination is less successful at hot temperatures). Choose a female flower on each plant to be pollinated. Each of these flowers will need to be pollinated with at least one male flower from a different plant (of the same variety if trying to save true-to-type).

Choosing pumpkins to save seeds from

Harvest the hand-pollinated pumpkins that were labeled before doing hand pollination. You’ll want a minimum of 6 pumpkins to ensure genetic diversity. Avoid saving seeds from individual fruits or plants that look unhealthy or diseased.

You can also save seeds from any old pumpkin, but know that the seeds likely will not grow pumpkins that look like the pumpkin they were saved from. If you haven’t hand pollinated the plants yourself, it’s not possible to know what the seeds will grow into. But it can certainly be a fun surprise!

Let pumpkins ripen on the vine. They should have a very hard rind that cannot be pressed into with your fingernail. The stem should be dry and hard. You can also cure the pumpkin by leaving it in a warm place for a few weeks. Seeds from Cucurbita maxima and Cucurbita moschata should be stored for a month or two prior to harvesting the seeds.

How to save pumpkin seeds

Slice the pumpkin open and scoop out the seeds with a metal spoon into a bowl or glass jar. Add a bit of water and stir. The seeds that float should be removed and discarded. The seeds that sink can be taken out of the jar and dried.

Dry the clean pumpkin seeds in a single layer on a plate, coffee filter, paper towel, waxed paper, window screen, baking sheet, or in a fine-mesh strainer. A minimum air temperature of 72°F will help speed up the drying process. Avoid using a dehydrator or oven since the intense heat might damage the seeds.

After they’re completely dry, seal them in a glass jar with a tight lid or a plastic container and keep them in the fridge or freezer. You may wish to put them in a paper envelope inside the container (or lots of envelopes if you’re sharing with friends in the spring). Dry pumpkin seeds for planting can be stored for over five years in an airtight container. 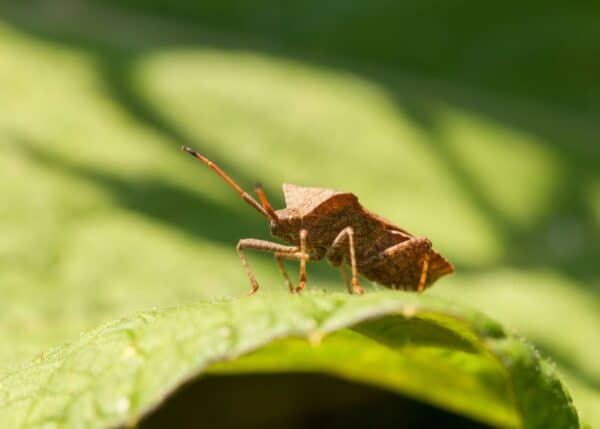 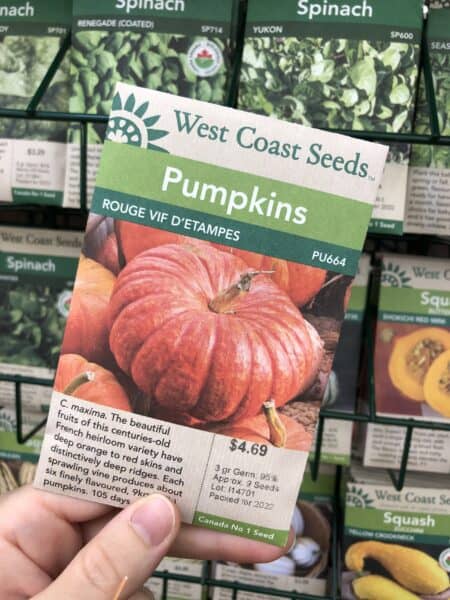 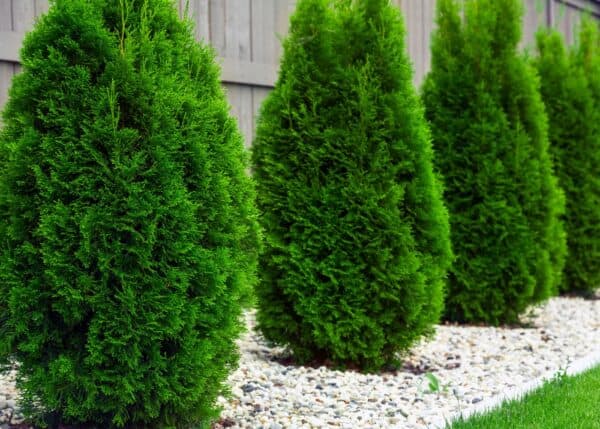