What’s the best apple for apple pie? It’s the Braeburn – a classic fresh-eating apple with an intense, unique flavour and a brightly striped peel.

Braeburn apples are known for their zesty flavour, crisp texture, and suitability for baking. The flavour of this large-sized variety is fresh and citrusy, with a hint of autumn spice. Braeburn apples make some of the best apple pie filling there is!

There’s lots to love about Braeburn apples. Read on to learn all about these tasty beauties!

The Origin of Braeburn Apples

The Braeburn apple is from New Zealand, where the original tree was discovered about 70 years ago.

Braeburn apples were discovered growing on a wild seedling tree in the early 1950’s by farmer O. Moran. The “chance seedling” likely grew all on its own from a fallen apple. The new seedling was propagated and grown commercially in Braeburn Orchard, and has been known as the Braeburn ever since!

The apples were special because they had a peel that was patterned with both red and green, rather than just one solid colour. They also had a complex flavour that exceeded the other apples commonly grown at the time. Even as modern apple breeding advances, the wild Braeburn remains a worldwide favourite.

“Back in 1952, local farmer Mr O. Moran found an unusual looking apple growing wild on the side of the road in the Waiwhero area near Motueka. He took the apple to Cedric’s late grandfather Norman and his brother Eustace Williams who were well known in the area for their fruit growing prowess. The brothers quickly saw the potential of the apple and took it to the then ‘Apple and Pear Board’ suggesting it should be grafted onto existing proven rootstock.”

Braeburn apples are not genetically-modified (they are not GMO). This apple variety was a spontaneous creation of nature that just happened to be discovered, propagated, and cultivated by humans. The wild tree is a “chance seedling”, and was not bred intentionally.

Parent Varieties of The Braeburn Apple

The exact parentage of Braeburn apples is unknown. Popular speculation is that its a cross between Lady Hamilton and Granny Smith, as these varieties were grown in the area where the seedling tree was discovered:

Offspring Varieties of The Braeburn

There are several famous offspring varieties of which Braeburn is a parent. The trademarked types Envy, Jazz, Sweetie, and Kanzi apples are offspring of Braeburn (mainly crossed with Royal Gala apples).

The taste is almost citrus-like, with a zesty acidic tang. There are also spicy notes of cinnamon and nutmeg, making Braeburn apples taste like autumn in an apple. Really fresh Braeburn apples can have a bit of a honey-like taste similar to pear, which beautifully offsets the acidity of the flesh.

Braeburn apples are at the peak of flavour when freshly picked. The best Braeburns have been allowed to ripen on the tree so that the sweetness and red peel can develop fully. There is nothing like a crisp, cool apple on a fall morning, picked straight from the tree! Apples that have been picked early for commercial storage may not have quite as good flavour as those picked when perfectly ripe.

The rich, balanced flavour is considered to be more complex and desirable than many other cultivated varieties of apple. The Braeburn apple is therefore often used in modern breeding programs to create new varieties.

Braeburn apples are mainly red, but have a yellow-green background colour. The yellow portion of the apple is typically around the stem/core, with streaks of red pointing inwards.

Braeburns that have been allowed to ripen on the tree typically have more red on their peel. The intensity of red is also affected by autumn temperatures.

Where Are Braeburn Apples Grown?

Braeburn apples are widely grown in their native New Zealand, and are also grown in Australia, USA, Canada, Chile, UK, France, and Italy. This variety is best grown in warm apple-growing regions, similar to Fuji or Granny Smith apples. Apples from the US/Canada/EU are generally available October-March, while New Zealand/Australian apples are sold during April-September.

Harvest season for Braeburn apples occurs in mid-autumn in apple-growing regions, and is typically considered a late-season apple. Apples grown in North America are harvested during September-October. European-grown Braeburns are harvested in October-November. This variety ripens in late March-April in its native New Zealand. Braeburns grown in Chile ripen in June.

Braeburn apples are available at some grocery stores, specialty markets, and from orchardists during harvest season. There are about two whole apples in one pound of Braeburn apples. Each single Braeburn apple weighs approximately 1/2 a pound (see photos at the end of this article). These are big apples!

Braeburn apples generally cost about $2 per pound at the grocery store. Each single apple therefore costs about a dollar. Prices are generally best right after harvest season (in October and in May).

Wondering why there are no Braeburn apples at your local grocery store? If you can’t find Braeburn apples locally, it may simply be that their offspring varieties have taken their place on the shelves. Either choose an offspring of Braeburn (like Jazz apples or Envy apples), or ask your grocery to bring in some good old-fashioned Braeburns, as they are available year-round.

How to Grow Braeburn Apples

Braeburn apples are one of the easiest varieties of apples to grow. They’re relatively adaptable and tend to produce large crops once established.

Braeburn apple trees grow best in warm climates that don’t get to cold or too hot, or USDA Zones 5-8. Requiring about 700 chilling hours over winter, this tree isn’t the most heat-tolerant, but it certainly is among the types with lower requirements for winter chill hours.

While Braeburn apple trees are somewhat self-fertile, it is very helpful to plant a second, different tree nearby to help with pollination of the apple blossoms to set fruit. Good pollinator partner varieties for Braeburn include Royal Gala and Fuji apple trees.

Plant each apple tree in a wide hole that is only as deep as the soil in the tree’s plant pot. Make sure that the knobby graft joint at the base of the tree is well above the soil line. Backfill the tree in the hole carefully with the native soil. Water the tree deeply to hydrate the roots and help the soil start to settle in place. The tree will grow best with irrigation for a few years until the roots become established.

Braeburn apples are excellent keeping apples for storage. Braeburns will store for 1 month in the crisper drawer of a refridgerator. They can be stored in a cold room or cellar for 2-4 months, and can be stored in commercial controlled-atmosphere storage for 8-10 months!

When choosing apples to store, look for apples without visible blemishes, bruises, or other damage. Whole, intact apples that are nearly ripe, but not overripe, will store best. Be sure to handle the apples carefully when placing them in storage so as not to damage or bruise them.

What to Make With Braeburn Apples

Wondering what to make with Braeburn apples? Fortunately, this specific variety is great for almost all culinary applications. Braeburn apples are great sliced on a charcuterie platter, blended into apple butter, or baked into a classic apple pie.

Braeburn apples are good in raw applications because they have a complex, balanced flavour that’s considered more interesting than many more-common varieties. They are juicy and crisp, sweet and tart. A fresh Braeburn eaten right off the tree is absolutely delicious!

Braeburn apples are excellent cooking apples because they tend to hold their shape and keep a relatively firm texture when heated. They don’t release their juice and tend to hold it in their flesh, making for a juicy dessert (rather than a wet dessert). While apples like McIntosh turn to mush in pies, Braeburn will hold its shape, juice, and texture in the oven.

Here are some delicious Braeburn apple recipes to try:

Braeburn apples are one of the best varieties for baking. These apples are known for their ability to hold their shape well in the oven. The pieces hold in all the delicious juices rather than turning into a wet mess.

Because they keep their texture so well, Braeburn apples are frequently called for in recipes for pies, cakes, and tarts. This variety also has a cinnamon-spice flavour, making them an excellent choice for apple pies, crumbles, crisps, and cobblers.

There are several ideal substitutes for Braeburn apples. Most notably, there are several varieties of apple that are directly descended from Braeburn, including Envy, Jazz, Sweetie, and Kanzi apples. While these varieties are different than Braeburn, they are offspring and therefore share many characteristics.

Sometimes Braeburn apples are specifically called for in recipes for baked goods like pies, tarts, and apple crumble. If Braeburns (or their offspring) aren’t available, try using Honeycrisp, Ambrosia, Pink Lady, Northern Spy, Spartan, or Cox’s Orange Pippin, as they will behave in a similar manner.

There's nothing like a perfectly-sweet fresh apple for a refreshing snack. But it turns out, there's quite a lot of difference in sweetness between different types of apples! The sweetest...

Applesauce is a classic harvest-season treat as the crisp days of autumn arrive. And like most things, applesauce is best when homemade with the best ingredients! The best apples for...

Welcome! I'm Mary Jane. I've built a handful of gardens over the last few years and have totally fallen in love with gardening. There is nothing like being out in the garden. Over the last few years, Home for the Harvest has grown into a larger home & garden site with hundreds of thousands of site visitors each year. Click around and read a few articles. Welcome! 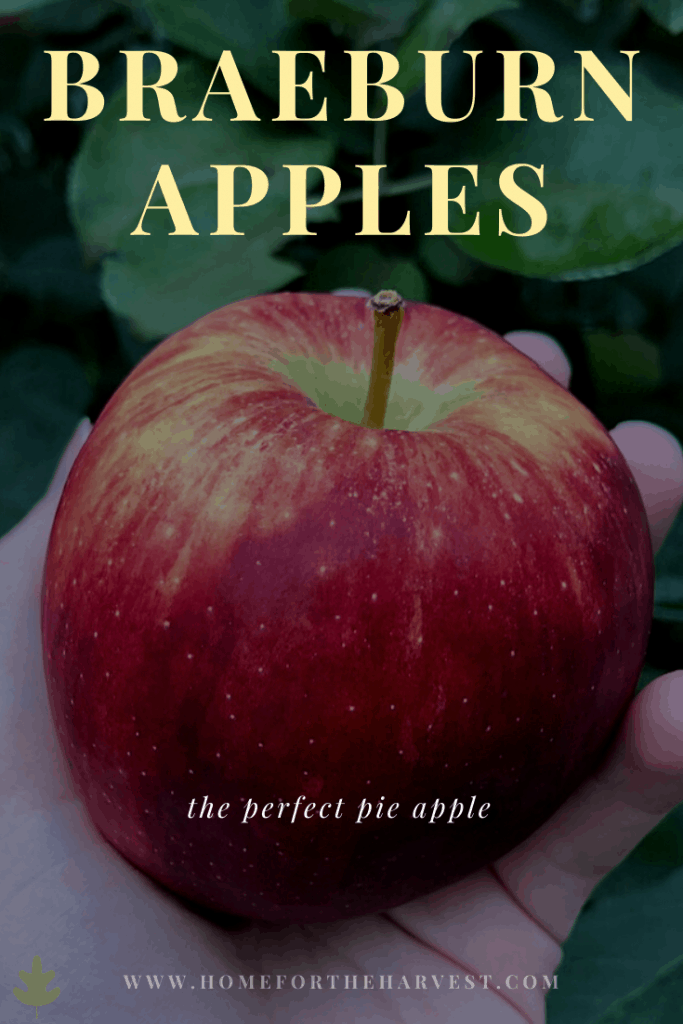